Up to my mid-20s I dutifully built up my CD collection by buying new releases on a regular basis, by the time MP3s started hitting the online stores I wasn’t as big a music purchaser but I still picked up a few albums and tracks from iTunes and Amazon’s MP3 store. After ripping all my CDs I had a little under 4000 legally acquired tracks in my iTunes library.

I’ve been a reasonably happy iTunes user despite having to break out junction a few times to enable multiple windows users to share the same media library. Having two computers as well as an iPod nano and iPod touch was starting to get a bit painful. The straw that broke the camels back was having to work on another computer for a few months that I didn’t own. Not having my music collection available was a real pain so I spent a few nights uploading all my music Amazon’s Cloud Player.

Having all my music in “the cloud” and being able to play it from there worked really well. I still had to use iTunes to sync tracks to my iPods but I don’t buy as much music as I used to so that isn’t too frequent a problem. After a few months I was starting to get bored listening to the same tracks over and over and I wanted to listen to some of the more recent releases that I had heard on the radio so I checked out iHeartRadio.

I liked choosing a specific artist and then letting iHeartRadio generate a playlist based on that artist, I heard a few new artists that I liked and bought a couple of tracks from them. After a while though the same songs kept repeating themselves and it got a bit frustrating not being able to listen to a specific track when I wanted (at which point I’d switch back to Cloud Player for a while). Eventually I decided to move to Spotify which gives much greater control over the songs I listen to as well as giving me access to people’s shared play lists.

Amazon have made some recent changes to their cloud player to make music discovery a easier by leveraging their recommendation engine. While the move by Amazon is a step in the right direction I don’t typically buy new music until I have heard it a few times. the discovery options available via iHeartRadio and Spotify are much more integrated into the overall listening experience. 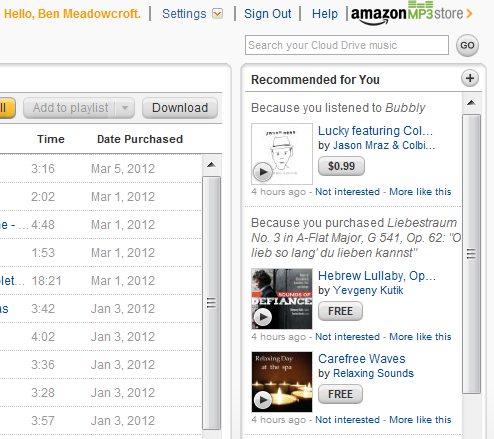